Fall is in the air here in the Pacific NW. It’s getting chilly and our cats & dog are finding snugly places to sleep.  I may need to make a couple more small beds to keep the peace amongst the cats.  Here’s the collection of posts on DIY pet beds. A favorite spot for Sage is the bed I made from an old sweater.  Here’s a great tutorial on how to upcycle an old sweater into a pet bed and you can check out how I made my version of the sweater bed. Vintage suitcases make cute & clever pet beds.  This post has a bunch of tutorials and examples of these fun beds.

I would consider learning to knit just so I could make some of these beds.  You can knit & felt wonderful pet beds using the two great tutorials here. If you crochet, check out this pattern for crocheting & felting a nifty bed. You don’t have to be an expert in sewing to make this cute & easy nest bed.

Some cats & dogs like to burrow more in their beds and this tutorial on making a hooded pet bed is perfect. A hammock for your small pet might be the best thing.  Here’s a post on how to make a hammock that can be free-standing or placed on a furnace to keep our pet good and toasty. And if you need to get your pet off a cold floor, or if you’re in the Southern Hemisphere and need to keep your pets cool, this post shows how to make an elevated bed out of PVC pipe like Kuranda beds.

I love a good hucklebutt! These Bull Terriers put on a good show.

Desmond comes home from a walk.

Babe comes home from a walk. 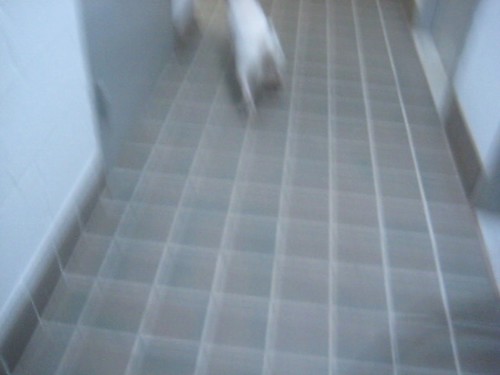